Riots And Looting Continues Across London 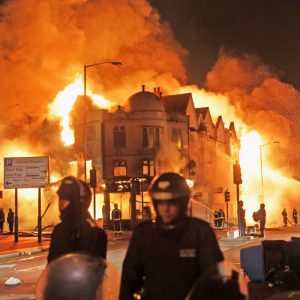 LONDON, ENGLAND – AUGUST 09: Firefighters battle a large fire that broke out in shops and residential properties in Croydon on August 9, 2011 in London, England. Sporadic looting and clashes with police continue for a third day in parts of the capital after the killing of the 29-year-old father of four Mark Duggan by armed police in an attempted arrest on August 4. (Photo by Dan Kitwood/Getty Images)