Proof that tough justice does put crooks off crime

Ken Clarke was handed proof that tough justice works yesterday as figures revealed criminals jailed for longer are less likely to reoffend than those given shorter sentences.

A Ministry of Justice report also showed that offenders commit fewer crimes after being released from longer sentences.

Only a third of offenders given sentences of between two and four years went back to crime within a year. By contrast, 43 per cent of those jailed for between a year and two years reoffended.

Read the full article in the Daily Express.

END_OF_DOCUMENT_TOKEN_TO_BE_REPLACED 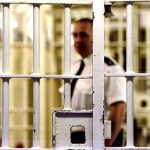