“People dancing look ridiculous to those who can’t hear the music” by Bob Turney, Ambassador for Make Justice Work

When a crime is committed it is deemed to be committed against the state. The victim goes one way, and the perpetrator goes the other way and never the twain shall meet.

Thus, the offenders have no obligation to their victims. In most cases they do not have to give an account of their behaviour to the court for if they plead guilty, which many do, it’s called plea bargaining. They do this in the main in order to gain a reduction in their sentences and an even further reduction can be reached if the court agrees to take other offences into consideration (T.I.C).

They will be represented by solicitors or barristers, who will do all the talking for them. The victim will have no part in this process, apart from a ‘victim impact’ report written by a probation officer that the magistrates or the judge will see, which will then be taken into account when sentencing.

If the victims offence is one of those which are T.I.C. they will not even get a mention in court. Yet that offence could be one the most traumatic events of the victims lives.

They are frequently left with fear and unresolved issues that can last for years. I took part in a phone-in on the Jeremy Vine show where the subject was burglary. Many victims called in, there were some heart rending stories, one man that phoned had been burgled over twenty years ago and his late mother’s jewellery was stolen. He and his wife have been trawling second-hand jewellery shops in the hope they might find their property. Clearly, this gentleman and others felt disenfranchised by the court process and are left bewildered and frustrated.

Like many other victims of crime he had no ‘closure’, I could feel his feelings of frustration as I told him in the most subtle and tactful way that I could that there was little or no chance of him ever recovering the property and that he would really benefit from moving on with his life and not letting the events of the past dominate the thoughts and feelings of today.

I feel that victims should play a much more active role in the criminal justice system. Not in the sentencing – that should always be left to the courts! But there is a role for them in the sentence and that is in the form of Restorative Justice, where the victim and the offender are brought together, the offenders will come face to face with their victims and they have to tell their victims not how they committed the offence, but why they did. This is voluntary on the part of the victim who will be counselled on what to expect and fully supported throughout the whole procedure.

When confronted with their victims most offenders have to take a sharp intake of breath. But more importantly the victim gets closure and it can be a life transforming event for some of them which will allow them to move on.

In a lot of cases of burglary the offender will try and dehumanise their victims, some have been known to turn the photos face down of the occupants of the house. In most of the cases I have dealt with the offender has been driven by addiction issues to alcohol and drugs. I’m not offering an excuse for their behaviour, far from it, but it might offer an explanation for it.

There is a saying “people dancing look ridiculous to those who can’t hear the music.” Some people haven’t grasped the full picture or have not ‘heard the music’ of Restorative Justice; they actually believe it means that if the offender apologises for their behaviour, they are then forgiven and no more is said or done!

This was the opinion of Amanda Platell, she got very hot under the collar in a television debate she had with me about Restorative Justice, she could not be further away from the truth ! Restorative Justice is PART of the sentence, and not a STAND ALONE sentence.

As a Probation Officer I’ve convened Restorative Conferences, both in prisons and in the community. They are not like the Jeremy Kyle Show, where the victims shout at the offender. It’s done in a calm way, where the victims express their feelings, and tell of the impact that the offence has had on their lives.

As for the offender they are inclined to then take responsibility for their offending, all indications point to the fact that those offenders who have taken part in this process are over 40% less likely to reoffend. There is an old saying – ‘the proof of the pudding is in the eating’- it’s clearly successful, let’s do more of it !

END_OF_DOCUMENT_TOKEN_TO_BE_REPLACED 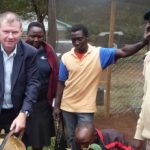