Criminal justice is the hot topic for all parties this election

As the political parties remove their boxing gloves, criminal justice joins the ring. The media this week has provided some interesting insights. The Liberal Democrats have shown some courage by expressing their rational and sensible views, particularly about the pointlessness of short prison sentences (with a typically classic response from the Sun and the Mail).

The Independent provided a really interesting case study. The story of Kenneth Brown (A big issue: what should we do about Kenneth?, 28 April 2010) shows how little chance of turning their lives around ex-offenders have in our broken criminal justice system. For a first time offender, even one short-term prison sentence could mean a future in and out of jail, as the high re-offending rate proves.  Offenders need not just punishment but also rehabilitation particularly support like that mentioned in the article and simply locking them up cannot do the job. Our new government should stop sending low-level offenders to our overcrowded prisons and concentrate on community sentences that do actually reduce crime.

And if Cameron really means that he wants to bring “some Conservative common sense and rigour to our social problems” then he could do worse than phase out short term prison sentences and use that money to reinvest in community programmes which really can address those social problems.

Alan Johnson flags up the power of neighbourhood policing as a way of improving public perception of crime in this country, yet the public remain unconvinced that crime, particularly violent crime, is actually reducing. But what is clear is that the endless criminal justice acts and bills over the last 13 years have detracted from a more strategic and sensible approach to crime reduction, and whether by design or  as a result of unintended consequences, has led to the excessive use of imprisonment for women and those lower level offenders who are now clogging up an overcrowded system who are strapped for cash when it should be concentrating its resources on those violent and difficult offenders who really need to be kept locked up. How daft is that….?

So if you were going to vote just on criminal justice policies, who would you vote for?

END_OF_DOCUMENT_TOKEN_TO_BE_REPLACED

When it comes to punishment, one size does not fit allRoma's Blog 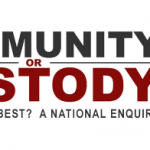